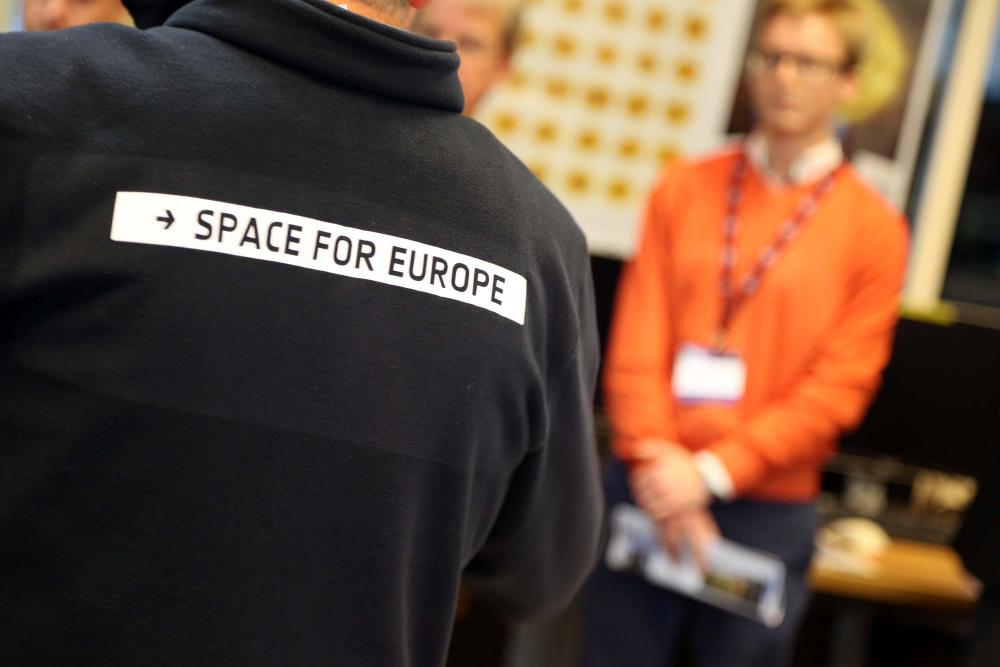 The organization of the fifth edition of SPACE-DAYS was held in Transinne (Redu), Belgium, on 13-14 October 2014. Under the theme ‘Space Value on Earth’, SPACE-DAYS 2014 focused on a very topical issue: “Galileo & Copernicus: Boosting Business and Innovation”. Check out why we went there.

It was a typical Belgian rainy day in Redu, at least this is how it looked from the hotel window that afternoon. The village in the Wallonie part of Belgium, definitely didn't indicate that the key players from the European space programs will gather there for a big event. Takeshi, our Luxembourgish Country Manager, and myself, were there with the same goal - to hear about the status of Copernicus and Galileo, check the business opportunities with Belgian companies and, of course, enjoy the networking with traditionally excellent Belgian beer!

The first day started with a nice tour to Redu Space Station (RSS). To be honest, I would have been more surprised if it had been my first visit to Redu, but since Takeshi works there on the EDRS project, I visit it regularly. However, it was interesting to experience RSS from a touristic perspective. RSS is in charge of operating big European Space projects, namely - Artemis, Galileo, and Proba V. In addition to that, it is noteworthy to mention that SES's back-up ground infrastructure is collocated there, which is not surprising knowing that RSS is co-owned by SES, QinetiQ and ESA. We also saw top-secret, highly-secured Galileo facilities, as well as new EDRS TT&C antennas. The future of RSS looks bright enough, the new EU project EDRS (European Data Relay System) will be operated from there as well, and this is followed by great plans to establish satellite center of excellence in Redu.

After Redu, the program continued in the Wallonie Espace, huge and modern space exhibit center. Being greeted by the organizers, and local authorities, networking with the fingerfood and, before mentioned socializing that included beer, started. Already, on this first day one thing was clear - Wallonia is perfectly organized in creating clusters of companies in space sharing the same focus! There was the whole line of small boots showing successful use cases – using GNSS and Galileo in navigating autonomous vehicles, using Copernicus earth observation data to monitor vectorial spread diseases, using Galileo and Copernicus for different humanitarian purposes, etc. A number of successful projects – and all of this was started in Belgium by Belgian companies!

Satisfed with the conversations we had, and full of enthusiasm and ideas, Takeshi and I went to the hotel, to catch a good sleep and prepare for the next day.

Second day was oriented on a number of sessions and key-note speakers, with two focused round tables:

Both Galileo and Copernicus are still in the development phase, but are mature enough to boost the development of a number of applications. This is why a budget for both programs is stable and already determined, and it includes a big share for application development. Galileo, for example, has a stable budget of EUR 7B for the next seven years, while EUR 150M/year is reserved for applications development until year 2020. Such applications will be funded from EU funds, instead of ESA funds, so a higher interest is expected between SME EU companies. Actually, the logical division of responsibilities is: ESA takes care of the technical capabilities and operation of the program, while EU takes care about its application and positive impact on the overall society.

Despite the recent failure of two satellites launches, Galileo is still a major EU project with a global effect. The Galileo is built to secure EU independence from external navigation systems. It is much more than a simple navigation, as it supports search and rescue service as well. In addition, the fact that it has the most accurate clocks in the space so far, makes the Galileo extremely advanced when compared with existing systems (e.g. GPS).

Copernicus, another EU program, is aiming to achieve an autonomous, multi-level operational Earth observation capacity of the sea, land and air. In the scope of this project, launching of 6 families of Sentinel satellites is planned. So far, Sentinel 1A is launched, and already provides all-weather, day and night radar imaging for land and ocean services. Interesting fact is that results will be available to everyone – it follows Open data policy. The data from the Sentinel 1A is already available and can be used by interested parties.

OK, so we have two big EU programs running – what’s in it for me?

Well, the EU wants to create the benefit from its programs – it wants to see positive effect on agriculture, logistics, traffic control, medicine, disease control, humanitarian issues, etc. First of all, there are number of networking associations and platforms that enable connecting stakeholders interested in common application of the mentioned programs. Associations like NEREUS or EEN exist with exactly this purpose. Then, EU has a Horizon2020 with 40% of funding reserved for SMEs. Applications using Galileo and Copernicus are always more than welcome in the mentioned associations and funds.

So the infrastructure, the opportunities and the money are there, and I can tell you one thing - Belgian companies are using it. Systems and solutions for EU railway maintenance and coordination, for flight control, shipping monitoring, maritime purposes, etc.

In the end, one very simple example. Belgium is one of the biggest exporter of potatoes. Since Belgium is not a country that vast as other exporter countries, the main concern of Belgian growers is how to grow more potatoes on the same surface? So they use satellite imaging for analysis of the soil quality and determine on which land to crop the potato on that year to achieve the best harvest!

Takeaways of the conference is: when there is enough regional focus and strategy on merging space and economy, and it gets combined with the enterprise networking platforms, a number of opportunities arise and they become EU funded projects. If we could apply this process in Croatia, the result would have the same success as in Wallonie. So how to start? Maybe with a national strategy? We can learn a lot for Wallonie.