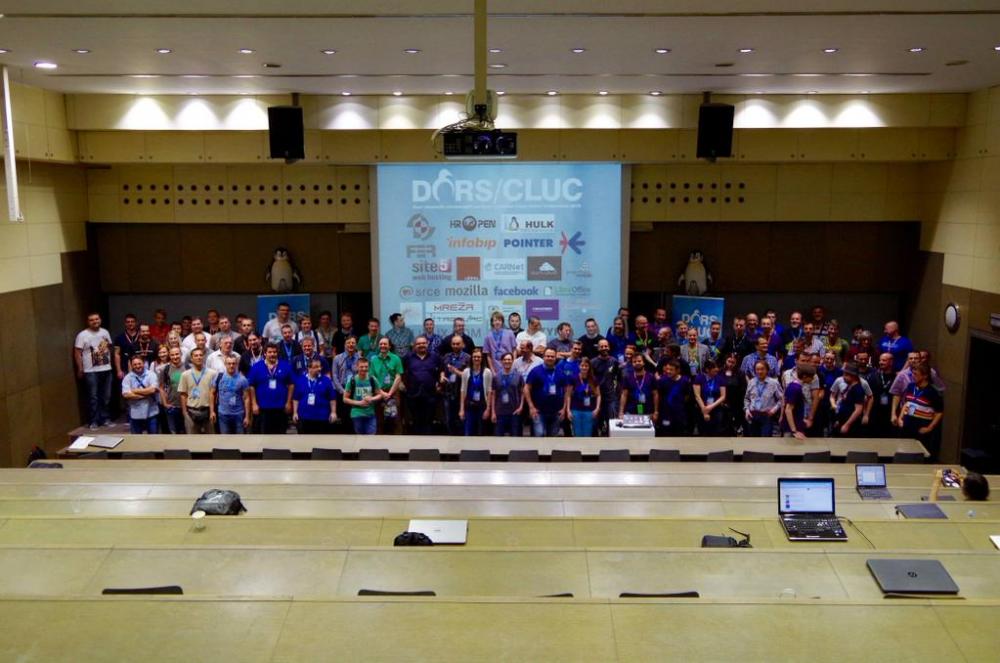 Conference started with presentations on using free software in government offices and administration. It was nice to hear that Croatian administration and education establishments lean towards using open source software. The situation in other countries greatly varies from small initiatives promoting the open source and at the same time struggle against commercial solutions imposed by governments mostly due to "isn't that your 'open source' dangerous" questions. Luckily, there are much brighter examples where open source solutions are the only accepted solutions. Essentially, the only barrier in using more open source products is due to strong commercial software lobbies. Open source in education finds its place as well. Fedora's small laptop that was displayed on the conference presents a great example as a learning tool for children. 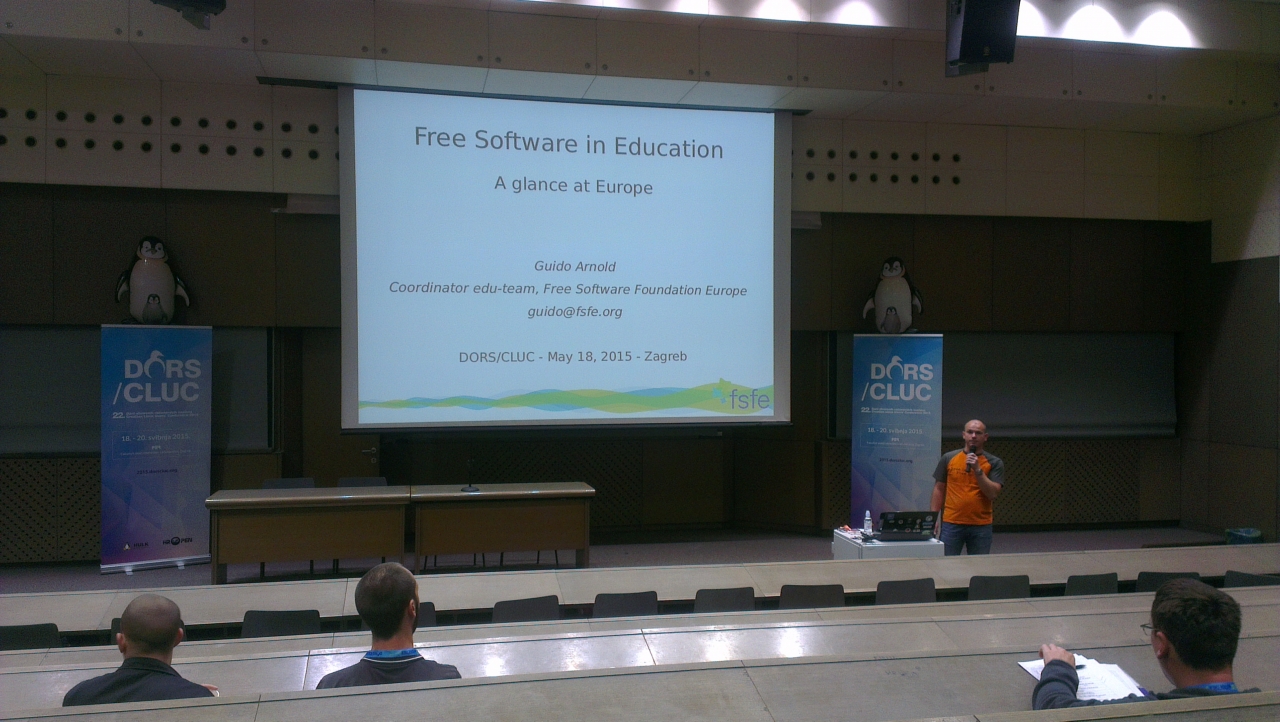 The speech on freelancing gave the pros and cons in comparison to a workplace that most of us are used to. It stressed that freelancing may be a great opportunity but also requires a large amount of paperwork and understanding of the legislative that should be taken seriously. The rule of thumb is "don't do everything by yourself - there's always someone who is smarter than you in at least some fields". This solves the tedious paperwork part. Now, go and freelance. Or don't.

Guys from Fedora Hungary gave us insight in Fedora project as a Linux based desktop. For specific purposes there are specialized minimal Fedora distributions with preinstalled set of applications. These, so called 'spins', aim towards users interested in various fields, such as system testing, electronics, music production, etc. Ubuntu guys were nowhere to be seen but great counterweight was in practical sense later on workshops where most of the laptops had Ubuntu or other Debian flavoured OS running. 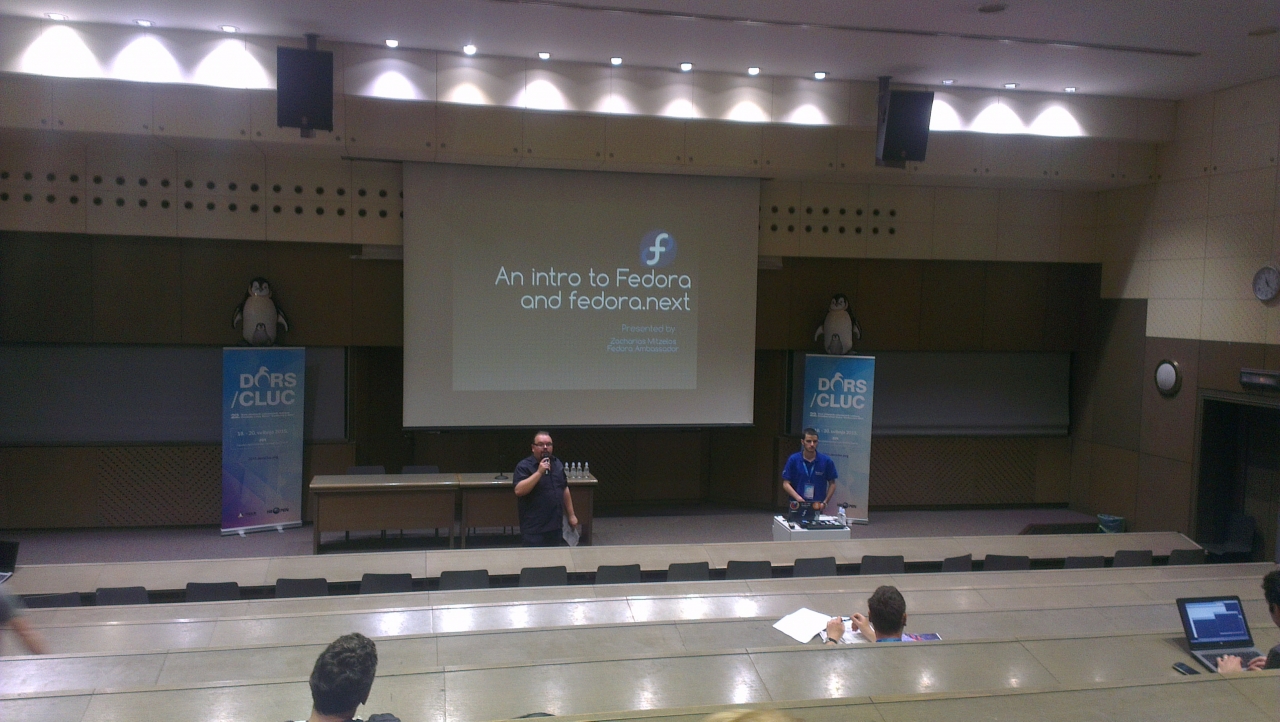 Since almost everything is web based now, why not have a web based OS – Firefox jumps in here quite nicely. By building their new OS, Mozilla team wanted to give to the users first truly open source mobile platform by allowing the same applications to run on devices ranging from mobile phones to desktop computers. Firefox OS based mobile phones have already been shipped to Africa, as an affordable platform for less developed countries.

Low level system topics covered the complete path from securely (or is it?) booting the machine using the secure boot technology, through system monitoring and log files visualization solutions based on an open source software, to the Facebook content caching and how exactly do all of the pictures, statuses and videos end up on our machines. If you are in Croatia, the answer is most likely through the Croatian route exchange (CIX) servers. And over the same network infrastructure there's access to the open street map - open source maps that greatly depend on the community for constantly improving the map details. An interesting fact here is that one of major open street map server hubs is located in Croatia.

A great ending of the presentations part of the conference was about electronic components analyser which detects the component type and pin-out for most of electronic components with up to three pins. Intended target audience for this is anyone with interest in electronics (and programming), without discriminating the level of knowledge in the field - beginners may order already assembled tool, those bit more adventurous could be more interested in kits which are easy to assemble, and for hard-core players a schematic and components list is available along with other requirements for building the device.

The whole two days, right in front of the auditorium, there was always something to see. Whether be it some sort of a 3d printer, a computer controlled mini-drill which was carving wood or engraving the electronic components board connections, something that once was an e-book reader, a gaming console and Fedora’s green mini laptop for children.

Drinks / snacks were available throughout the duration of the conference, and more importantly - there was coffee. 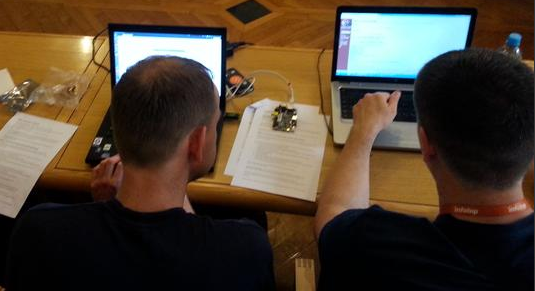 After two days of great presentations it was time for us to shine. Yes – the workshops. We attended the secure data storage and collaboration solution workshop based on the Seafile platform, OpenStreetMap data usage workshop, Firefox OS workshop and how to have your ownCloud on a banana (banana pi, that is) workshop.

Interesting fact – since conference ended, at least one person in Amphinicy removed the preinstalled OS from his business laptop and installed one of Linux distributions instead.