Do you like droids? Then you should have visited Droidcon Zagreb 2015.

Droids are now in every pocket...ok, almost every pocket and I must say that we in Amphinicy respect and support other platforms as well. Let’s face it, it is our goal to publish our apps to many platforms and each one of them has it’s ups and downs. But since we are talking about Droids, let’s stick with the Android scene for a while, shall we?

Funny thing happened the first minute I entered the Droidcon territory, when a guy approached me with a question: “Is that a red Blackberry?”. At first I was confused, mostly because of his tone which was very formal and seasoned with disgust but then I remembered that I’m on Droidcon turf and was very relieved when i was able to reply that it’s an ANDROID LG G2 phone. He told me that they (whoever “they” are) are looking for a guy who has a red Blackberry and then he flew off continuing his mission. I really hope the Blackberry guy hid his phone during those two days. :)

Anyway, after picking up my badge and a bag of goodies I headed to the main room named “Plenar” where the Droidcon opening session was about to begin. 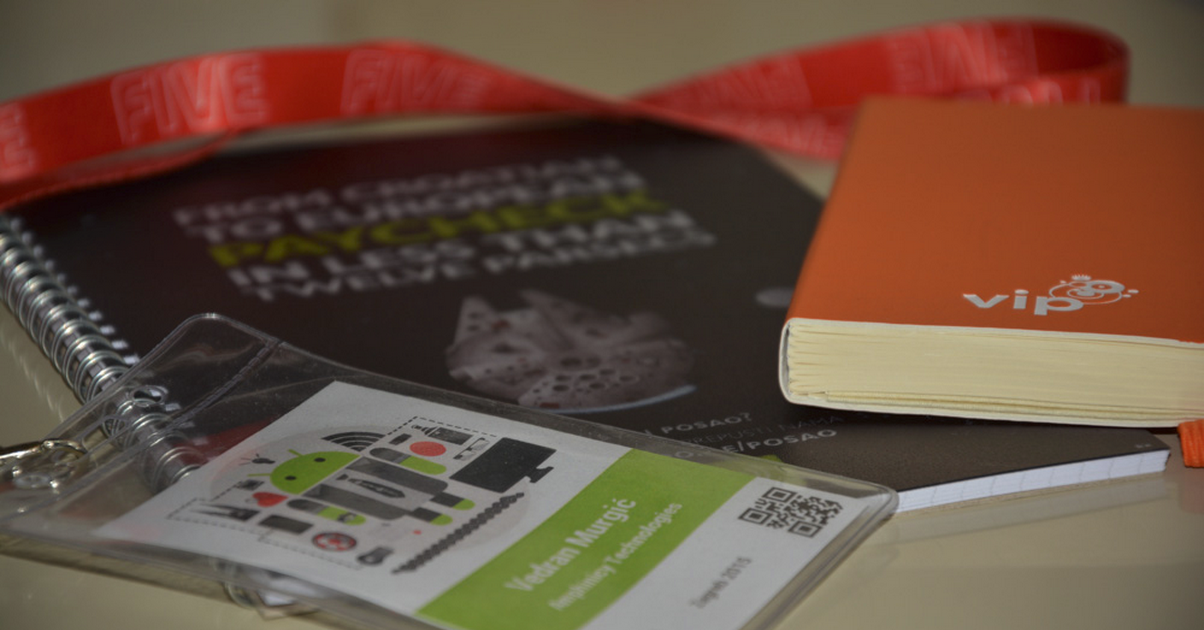 Droidcon Zagreb started loud and with bright lights! There were lasers, music and two “Breaking Bad” lookalike guys that were running the show. It looked nice and was a great introduction for MC Goran Vugrinec who was the host of the Droidcon Zagreb 2015. His first appearance was at Keynote session where he gave us a few informations about Droidcon conference and its organizers. Droidcon is a global developer conference series and a network focusing on the best of Android. The first two droidcon conferences were organised by an international team of Android enthusiasts in Berlin and London in 2009. Since then, this community driven conference format has spread around the globe rapidly and now those kind of conferences take place in 20 countries, including Zagreb, Croatia starting this year. Droidcon Zagreb was organised by Troido, first and the oldest German Android consulting company that has its affiliate in Croatia.

Goran did a pretty good job running the show and he held a great stand-up comedy performance at the end of day one.

The program itself was rich and interesting, and sometimes there was a problem deciding which talk to attend. Unfortunately, some potentially interesting talks (and of course, the ones I chose to attend) were canceled but those things happen and there is always something interesting in other rooms.

Although most talks were interesting I must say that some speakers seemed to me like they were uninterested and forced to give the presentation. Some of them were not well prepared and had troubles searching their own documents and code snippets, which looked very unprofessional and in the end - boring. I will focus on the best ones and give you a short review of the ones that I believe were the most interesting ones.

First talk that really interested me was Xavier Hallande talk about “Developing for Android TV and the Nexus Player”. He works at Intel Software and Service Group in Paris and gave us nice presentation about Android TV platform, design guidelines and standard functionalities that developers can use in their Android TV apps. Presentation was full of examples of designs that are available on Android TV and he also brought the Nexus Player and a game controller to the talk and gave us a short info about gaming functionalities that are supported on Nexus Player.

Ognjen Dragoljević, who is a software engineer at Facebook London, held a great talk about “Handling images on Android” where he spoke about the real life problem they had in Facebook android app and how they solved it. The problem itself is something every image rich app is struggling with and the Facebook approach can be applied in many different situations and applications so they take up less CPU, less memory and give better user experience. One interesting solution he gave us was to use progressive jpeg which will show the image almost instantly but of lower quality. Quality of the image will then be enhanced when the rest of the image data is loaded. This will give the user basic information about the image so he can decide if he will wait for it to load or continue scrolling for other posts. Second solution is to use Google’s new image format - webp. This format is introduced by Google and is currently supported on Android platform and only on Chrome and Opera browsers. According to the data you can find on the official webp website, webp images take up 25% less space and thus load faster. Third interesting image handling option is to use Facebook’s frescolib library which will show placeholders for your image before the image itself loads. Once the image goes off screen it automatically releases its memory. The library can load images from the network, local storage, or local resources and it has three levels of cache for saving data and CPU, two in memory and another one in internal storage. The highlight of the talk was an actual comparison of the old and new Facebook app. The apps were running simultaneously on two emulators and it was obvious which one loads images faster.

The last talk was titled “No Bars? No Problem.” and was held by James Nocentini. This was probably the most instructive talk of all I attended and it looked like everybody was 100% focused even though that was the last talk. So what was it all about? Well, many apps today, if not most of them, are syncing some data from the server and sometimes your data connection is not available or as author would say “No bars”. Best you can do in that case is to store your data locally and wait for the data connection to become available. And he did it. During the talk. Showing us a demo at the end by running two emulators, shutting the data connections on them and making changes to the application, simultaneously enabling the data connection afterwards to let the apps sync with the server and exchange the data. To achieve that, he used Couchbase Mobile which gave him an embedded JSON database and gateway to replicate to.

But that was not all that was happening at the Droidcon Zagreb 2015. The main hall was some kind of a recruitment area and a food festival. There was also an Aftercon party that was held in Vertigo bar on top of hotel Antunović that lasted until the dawn.

And, of course, there was a hackaton contest. Three applications were submitted and the winner was chosen by the loudest clap from the audience. And the winner is - Chickcounter!
Although there was a lot of female developers somebody was probably keeping it’s head deep into the monitor, building this application, thinking that there is no more than five girls at the Droidcon. Why five? Well, the idea of the app was to press the button when you see a girl and a hand on the screen will add one finger. If you reach 6 you get an error! And the crowd went wild!

Now start your Android studio and build an app. Visit next Droidcon and start your career as an Android developer.

Hm...what do you think, did “they” found that Blackberry guy in the end?!